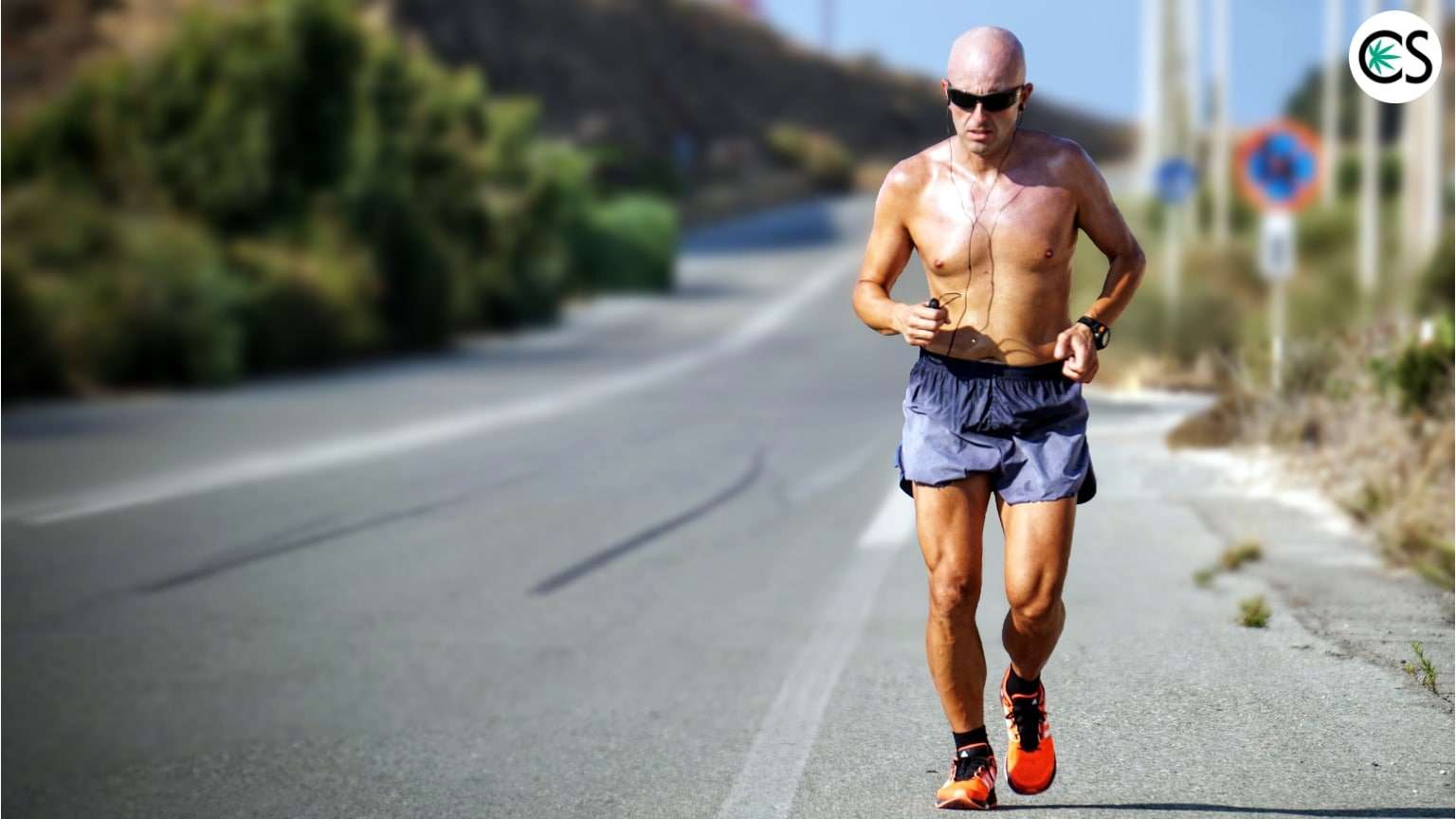 With over 11,000 followers his Instagram accounts (@runninhigh), Collins doesn’t hide the fact that he’s a big fan of cannabis.

While the Colorado-based runner says THC might not be for everyone, he does take CBD every day. “CBD use,” says Collins, “is more for health-minded people.”

He also indicates that the non-psychoactive cannabinoid is part of his daily routine.

Why exactly does Collins dose with CBD on the daily?

He says CBD products not only boost his energy levels, but also help speed up recovery time from long runs and are excellent for improving sleep.

CBD for Runner’s Aches and Pains: Why More Athletes are Ditching Advil for CBD

For decades, the common go-to for any athlete in pain was over-the-counter meds like ibuprofen, Advil, and Tylenol.

As a runner and cyclist myself, I used Advil for years before making the switch to CBD.

It’s affordable, accessible, and works great for managing pain. But these OTC medications can come at a cost.

The use of ibuprofen (the generic form of Advil) has shown to contain some potentially serious side effects.

The major adverse reactions of this wildly-popular pain killer include negative effects on the gastrointestinal tract (GIT), the kidney, and blood clotting system.

Research indicates that one in five chronic use of ibuprofen and other NSAIDs will go on to develop gastric damage.

Personally, using Advil made me feel awful. Sure, it helped with the pain, but it also made my stomach hurt.

And led to serious indigestion and constipation. Heart palpitations. Loss of appetite. Increased sweating and some serious lightheadedness.

The side effects of OTC pain meds/anti-inflammatories aren’t fun.

Which is exactly why so many professional and amateur athletes alike that have discovered CBD are likely just as thankful as I am.

How CBD Works for Pain and Inflammation

There are over three million pain receptors found throughout the body.

When we experience pain, cells that release pain-producing chemicals are activated and eventually travel to the spinal cord where pain signaling messages are then conveyed to the brain.

Ibuprofen works for pain by blocking the production of prostaglandins, a substance that is released by the body in response to injury and illness.

Prostaglandins are responsible for causing pain, inflammation, or swelling…all of which are common in individuals who regularly run long distances and do endurance sports.

While ibuprofen obviously works well to block pain and reduce inflammation or swelling, some of the side effects associated with it aren’t something I want anything to do with.

CBD, on the other hand, works with our body’s own endocannabinoid system.

While CBD does not bind directly to either of the body’s cannabinoid receptors (CB1 and CB2), it does bind to the TRPV-1 receptor, which mediates pain perception, inflammation, and body temperature.

At high concentrations, CBD has also shown to activate the 5-HT1A serotonin receptor, which is largely associated with the anti-depressant effects the cannabinoid is known for.

Aside from its connection as one of the “feel good” chemicals in the body, serotonin is also responsible for several other neurological and biological processes in the body including: addiction, appetite, anxiety, sleep, and pain perception.

CBD is a well-known anti-inflammatory.

When a person experiences inflammation, signaling proteins known as cytokines are synthesized and secreted by immune cells.

Cytokines are the modulating factors that help balance the onset and resolution of inflammation.

One of the reasons CBD is considered to fight inflammation is by suppressing the production of pro-inflammatory cytokines.

Pain and inflammation aren’t the only things runners and other athletes are using CBD for.

This non-psychoactive cannabinoid just so happens to be excellent for post-workout recovery. A hard run can call for serious recovery.

After an intense run it’s not uncommon to feel sore and tired. Some runners even get nauseous after a hard run.

After a long workout or run, there’s nothing better than taking time to relax and let the body recoup.

CBD has shown to reduce muscle spasms in multiple sclerosis patients, although a CBD/THC application is known to work better for muscle spasms than CBD alone.

Several studies indicate that CBD has a beneficial effect on mood, stress, and sleep.

If you’re looking to relax after a long run, CBD contains the soothing benefits you need when deep relaxation is necessary.

Where THC is known to exacerbate anxiety in some people, CBD actually has the opposite effect and works as a relaxant by reducing autonomic arousal, or those physiological changes that occur in the body during times of “flight or fight.”

CBD is so adept at stimulating relaxation that it’s known to counteract the paranoia and anxiety sometimes caused by THC.

CBD to Help You Sleep

How to use CBD for Dogs

How to Make CBD Oil Infused Butter
We use cookies to ensure that we give you the best experience on our website. If you continue to use this site we will assume that you are happy with it.Ok