Home
Health
Holiday Hangover? CBD Could Be Just What You Need
Prev Article Next Article 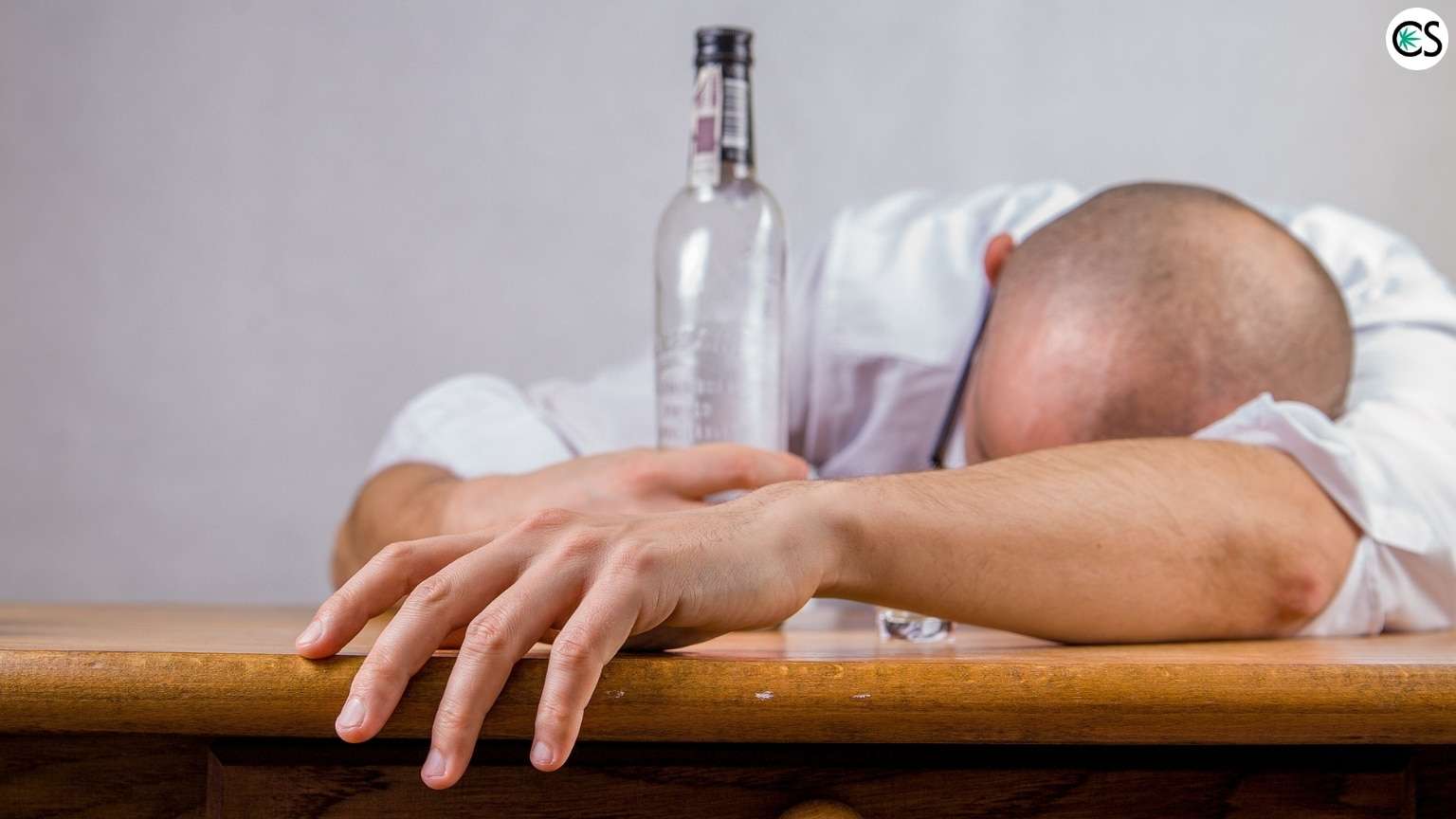 Family gatherings, company work parties, and holiday celebrations with friends can lead to drinking more than you typically might…which can make you feel like death the following day.

Have a holiday hangover? CBD could be just what you need.

Can CBD Help Your Hangover?

The more you drink (which is easy to do during the holidays), the worse you’re liable to feel.

And if you don’t normally drink, even 2-3 drinks can make you feel like terrible the next day.

Headaches, nausea (perhaps accompanied by vomiting), anxiety, irritability, depression, difficulty concentrating, muscle aches, fatigue, shaking, and spinning are just some of the symptoms of a hangover.

Let’s not forget that alcohol is basically poison.

Not to knock a fun night of drinking or getting your drink on during the holidays, but alcohol consumption can do some serious damage to the brain and body…especially if you’re a heavy drinker.

If you’ve tied one on this holiday season (or plan on it at some point), CBD could be exactly what you need to ease symptoms of a nasty hangover.

How Does CBD Help a Hangover?

CBD has some pretty amazing attributes…especially when it comes to the symptoms of a hangover.

It’s known to reduce inflammation, help with chronic pain, and has shown to reduce nausea in some individuals.

While there haven’t been too many studies that look into the effects of CBD on excess alcohol consumption, a 2013 study performed on lab rats did take a look to see if CBD could alleviate alcohol’s toxic effects.

The rats were given enough alcohol that caused life-threatening seizures as a result of extreme neurodegeneration (think killing brain cells, something that happens when we drink to excess).

CBD was applied to the rat’s skin.

This transdermal application decreased neurodegeneration by close to 50%.

Mice are not men, but this study might show some promise when it comes to mitigating the effects of that holiday hangover.

5 Ways CBD Could Help Your Hangover

CBD is not a magic cure-all. But it can help with a hangover. Here’s how:

There isn’t any headache quite like the headache that accompanies a hangover.

Why does a night of drinking cause a splitting headache? Because alcohol causes an inflammatory response in the immune system.

These hangover headaches are a manifestation of the body’s inflammatory response.

Looking for a way to reduce the pounding in your head? CBD might just do the trick.

Studies show that it can reduce the frequency of migraine headaches and neuropathic pain.

It’s also a well-known anti-inflammatory, which could have a positive effect on the aches and pains you feel after a night of holiday (or any other day) partying.

Hugging the porcelain god after too much rum punch at your company Christmas party?

We’ve all been there. This is because when you drink alcohol, the stomach your acid produces increases.

Alcohol is an irritant to your system, making stomach upset a very real side effect from too much drinking.

Nausea and vomiting after a night of drinking is actually a sign of alcohol poisoning.

Research shows that CBD may be effective in treating both nausea and vomiting in chemotherapy or other therapeutic treatments.

And while alcohol certainly isn’t considered a “therapeutic treatment”, a night of drinking can easily lead to nausea and vomiting the next day.

Ever question your entire existence after a night of heavy drinking? Yah, us too.

Tying one on can lead to some serious anxiety and depression the next day.

One of the most well-known effects of CBD is its ability to ease stress and anxiety.

It’s been shown to be a potential treatment for several different anxiety disorders and has become popular with countless individuals because of this.

The anxiolytic effects CBD has are thought to be due at least in part to the way cannabidiol interacts with several receptors that regulate fear and anxiety, specifically the serotonin 5HT1-A receptors.

There’s no doubt that alcohol affects the brain in some very serious ways (ever made a bad decision when you’re drunk?), but the longstanding idea that it actually kills brain cells is nothing but a myth.

Here’s the real deal. Drinking actually damages the ends of neurons known as dendrites, which results in difficulty relaying messages between neurons.

The brain cell itself isn’t damaged, but the way it communicates is.

Here’s the beauty of CBD. It’s a known neuroprotectant. Which means its really good for your brain and could help reduce damage to the brain and nervous system by encouraging the growth of new neurons.

It’s been shown to be effective for several neurological diseases, such as multiple sclerosis and Parkinson’s disease.

In Alzheimer’s disease patients, CBD has shown to reduce or eradicate the impact of inflammation, the build-up of oxygen, and the decline of brain cells.

CBD is known to be a powerful antioxidant.

It’s been suggested that CBD is even more powerful than vitamin C and E.

Research shows that CBD is a powerful neuroprotective antioxidant.

It’s so powerful, in fact, that US Patent #6630507 is exclusively for the antioxidant and neuroprotective properties of cannabis.

To get rid of a hangover, several people turn towards antioxidants to give them the boost of brain and body repair they desperately need.

The antioxidant properties of CBD could help reduce the free radical damage done from one too many drinks at the holiday soirée.

Is CBD a Good Hangover Cure?

So far, there haven’t been any big studies to see exactly how well CBD may or may not work for a hangover.

There is, however, plenty of anecdotal evidence floating around the web that indicates that CBD might just be what you need to ease that holiday hangover.

As far as being a “cure”, that could be pushing it.

As one Reddit user put it: “It will tackle the headaches and the nausea, but you’ll still feel like you’re walking on a moving boat.”

A reply in the same thread states: “CBD has the ability to remove toxins in your body and help assist your overall body functions.

When you drink alcohol, you are essentially poisoning yourself and that is why you feel like complete ass in the morning. CBD is not a magic bullet but it will assist you in recovering.

Drink this and take some vitamins and you will be on your feet again in 2 hours.”

Don’t want to go that far? We can’t say that we blame you.

Seriously, one of the best things you can do to get rid of a hangover is to keep yourself as hydrated as possible.

Water is the best thing you can employ and taking CBD on top of keeping yourself well hydrated can a provide a nasty 2 punch combo against that hangover.

CBD has the power to get rid of the nausea and vomiting you might experience, offer relief for your pounding headache, ease your anxiety, and provide the antioxidant protection to your brain you need.

Will it make you feel like you didn’t drink the night before?

Probably not. But it might help an awful lot.

We’d love to say that taking CBD will cure your hangover and make you feel completely on top of your game, but there isn’t enough evidence to say that with absolute certainty.

Can it help? Sure. Can it cure? Likely not.

Next time you’re hungover this holiday season, try some CBD a couple times a day and make sure you keep yourself hydrated!

We can’t say it will make your hangover go away completely, but we think it will probably help.

How To Make A Simple Hemp CBD Infused Body Butter

How to Make CBD Coconut Oil With Medicinal Hemp

How We’re Using CBD & Cannabis Oil to Treat Our

Should You Try CBD for Your Pet?

How To Make A Simple Hemp CBD Infused Body Butter

How We’re Using CBD & Cannabis Oil to Treat Our

How to Make CBD Coconut Oil With Medicinal Hemp

Should You Try CBD for Your Pet?
We use cookies to ensure that we give you the best experience on our website. If you continue to use this site we will assume that you are happy with it.Ok